Visit Dudepins Today To Find, Save & Share The Coolest Stuff For Guys

Top Men’s Fashion and Style Through the Years

If there is one thing that stays the same with men’s fashion, it’s change. In fact, it’s been happening to men’s fashion for centuries. Each season, fashion experts would publish magazines and articles that contain their predictions on which style, color, and fabric would be “in” in the next season.

For some, men’s fashion is a high priority. They prefer to wear clothes that are currently popular. They try to keep up with the latest fashion and style. But with the advancement of modern technology, fashion trends are coming in and out at a surprisingly steady rate. Keeping up with the latest men’s style can be a headache for most of them.

Let’s take a look at how men’s casual style and fashion trends have changed over the years.

Men’s street style is more of a reflection of their lifestyle and personality. It is generally associated with youth culture. Since it is under a constant state of evolution, it can be difficult to define. But the core components of men’s street style are items you already have in your wardrobe – t-shirts, jeans, varsity jackets, caps, and sneakers. They emphasize on casual and comfortable clothing.

The classic streetwear is big, baggy clothes. Oversized shirts are often paired with baggy pants and white sneakers. So, if you’ve spent countless hours in the gym sculpting an impeccably V-shaped torso, this may not be the best option for you. In street style, walking around wearing a shirt with a logo on your chest is acceptable. In the luxury world, it may seem promiscuous. But in streetwear, a logo is an acknowledgment that you’re aligned with a particular style tribe.

Cyberpunk is a subgenre of science fiction. Cyber refers to technology; while punk refers to the attitude of the protagonist. Often, this refers to dissenters, visionaries, criminals, anti-heroes, and outsiders. Punk is often associated with dark colors and leather clothing. If you are looking for distinctive, edgy and dark clothing, then this would be the perfect style for you. Keep in mind, though, that it won’t work well for everyone.

What’s great about male cyberpunk fashion is that you can get away with wearing whatever you want. As long as it’s dark and futuristic, it is categorized as cyberpunk. Some prefer to wear dark, baggy clothing; while others prefer tight-fitting clothing.

Cyberpunk clothing doesn’t always have to be black. You are free to use colors in the darker range like dark gray or brown. The Korean entertainment is booming right now. They are not just known for Korean dramas, k-pop music, and beauty products; they are also making it big in the fashion industry. In fact, Seoul has become one of the largest destinations for international style seekers.

Korean men have absolute freedom in their interpretation of fashion. Although the Westerners have influenced their fashion style, they try to develop their sense of individuality and identity. They are open to try new things and take more risk in prints, colors, and cuts.

Men’s fashion evolves and continually changes over time – from the sharp, dapper and charmingly retro look of the 1920s men’s fashion to the more unfortunate looks that became popular during the 80s and 90s. It’s amazing to see how certain events in history have influenced how people dress up. For instance, people were forced to come up with simple outfits during the World War II since they were only allowed a certain amount of fabric.

Some of the fashion trends that defined earlier eras have stood the test of time and even became style staples. Others are just fads. They became popular for a short period of time, and are never worn again. For instance, Michael Jackson made the parachute pants popular in the 1980s. The hippies made bell-bottom pants all the rage in the 70s. These pieces of clothing are no longer available in today’s clothing stores.

Let’s take a look at men’s fashion styles through the years and how far we’ve come to get where we are today.

There is not a lot of innovation in men’s style and fashion from the past year. Some of 2016’s biggest trends spilled over into 2017. But men’s fashion 2017 saw a huge rise in bold hues, prints and patterns. Designers incorporated more colors, and patterns into their clothing as they believe that the modern men are brave enough to go out of their comfort zone. They aren’t afraid to make bold statements into their clothing and experiment with boldly patterned shirts. If you’re not as brave, we suggest that you start with monochrome prints.

This year, men are starting to bid farewell to skinny jeans are opting for wide-leg trousers instead. They prefer a more relaxed way of dressing. Looser cut jeans and trousers have been working their way from the runways to the mainstream for the past few seasons.

Men’s fashion 2016 saw a revival of the past trends – from the 50s inspired shirts and overalls to distressed jeans to traditional colors.

Men’s fashion 2016 took inspiration to your grandfather’s favorite short-sleeved shirt – the Cuban collar shirts. These shirts are relaxed, breathable and made out of cotton. We’ve seen an uprise in Cuban collar shirts during the summer. Green and gray have been the color of choice for 2016.

Distressed jeans died down a little during the mid-2000s but made a major comeback in spring and summer 2016. These jeans are versatile, comfortable, and can add a bit of individuality to your look. With more and more men opting for a more relaxed fit, many of them have steered away from the skinny jeans. Rather, they found a new love for the wide-legged jeans and trousers.

Fun, freedom and rebellion were the theme of 90s fashion men. It seems to be all about being daring, brave and bold in your clothing choices.

They seem to reject the uncomfortable clothing trend of the past decade. That said, comfort became the emphasis of men’s fashion during the 90s. During this time, there was a surge in the popularity of Hip Hop music, which encouraged the wearing of oversized hoodies, distressed jeans, graphic print t-shirt, and trainers. Even corporate attire became less formal, and suits got bigger than usual. Neon-colored clothing and accessories also became popular with the youth. 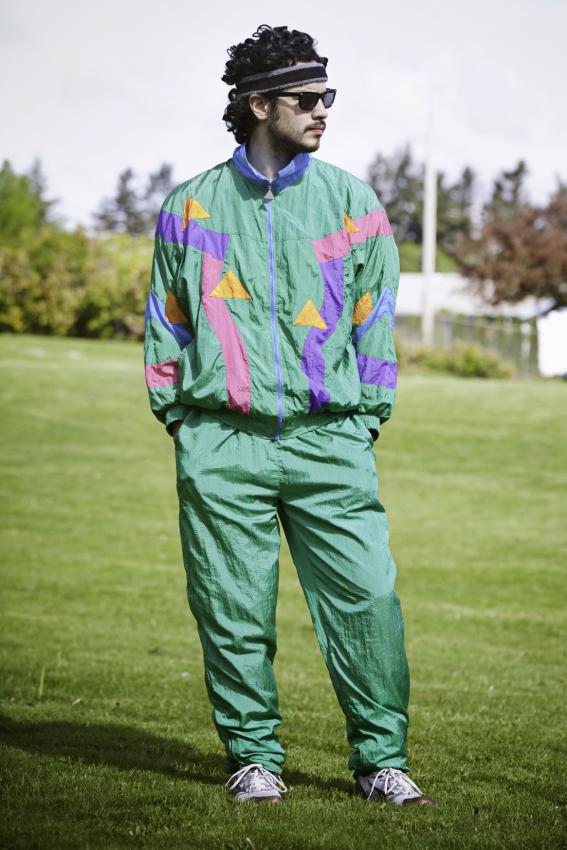 80s fashion for men was all about power dressing. They became more serious about fashion and preferred more expensive clothing and gaudy accessories. Matching sweatshirts and sweatpants were incredibly popular throughout the decade. It was everywhere. Men rocked snug fitting, but comfortable clothing. Graphic patterns, bold patterns, and broad shoulders conveyed a new national confidence.

In the early 80s, denim pants rose in prominence, with Levi’s and Wrangler being the jeans maker of choice. Athletic shoes also became a fashion symbol in the 80s. Military surplus clothing, tie dye shirts, and bell-bottom jeans were the highlights of 70s fashion for men. The early 70s fashion men was a continuation of the hippie rebel style.

During the 70s, disco funk was all the rage. Shirt collars became long and pointed, neckties became wider and bolder, and suits became available in a bewildering variety of colors. Homemade accessories like bracelets, headbands, and necklaces also became popular in the 70s.

In the 60s, people preferred more casual clothing. Casual was in, and formality was out. Sports shirts and polo shirts were the norms for casual wear. Even men’s business wear took on a new casualness. Collars got longer and wider, lapels, belts, and ties got wider. The conservative men’s suit took on some geometric design. It was also during this decade when wide leg pants were introduced. They also started growing their hair, with The Beatles leading the way.

50s fashion men was dominated by conservative gray suits and minimal accessories. During this time, men returning from the military were trying to fit and look the part. The goal was to look smart and employable. There was less variety of styles offered.

Back in the day, almost everyone was wearing a boxy suit, oxford shirt, loafers and rep tie. Individuality in style of clothing has become an afterthought. Since everyone is wearing the same set of clothes, mass-produced ready-to-wear clothing took over as the everyday norm. The clothes were cheaper and basic pieces were more accessible. 1920s men’s fashion pivoted on classicism but was injected with a thematic twist. It was a time of classic sophistication. The emphasis was on formality.

Suits were an essential part of men’s daily wardrobe and wore them with pride. They wore suits at parties, in the office, and even on ordinary days. The only exceptions were teenagers and blue collar workers as they dress more casually. But they also own classic suits in neutral colors. Much of men’s clothing in the 1920s greatly influenced today’s business attire.

Most people buy something because they’re seriously on trend this season or because they love that particular brand. We understand that you want to look stylish and stay on top of the latest trends, and there’s nothing wrong with that. But before you decide to buy any piece of clothing, ask yourself if you really like it. Also, will it look good on you?

Beware of buying something just because it’s on trend right now. Sometimes, these trends don’t last that long. After several months to a year, these fashion trends will long be forgotten. It will be such a waste of money investing in clothes. What was cool last season may look weird and awkward this season. That said, we highly recommend that you stick with basic and versatile clothing when shopping for clothes. Opt for crew neck t-shirts, well-fitted jeans, white button down shirts, black or navy suit, sports coat or jackets and a good pair of shoes.

Once you have built a classic and timeless wardrobe, it would be easier for you to bring your own twist and incorporate the new trends into your personal style. Not only will you save money, but you’ll also look better on it. No matter what outfit you choose, make sure everything fits impeccably. Find the style that is right for you.